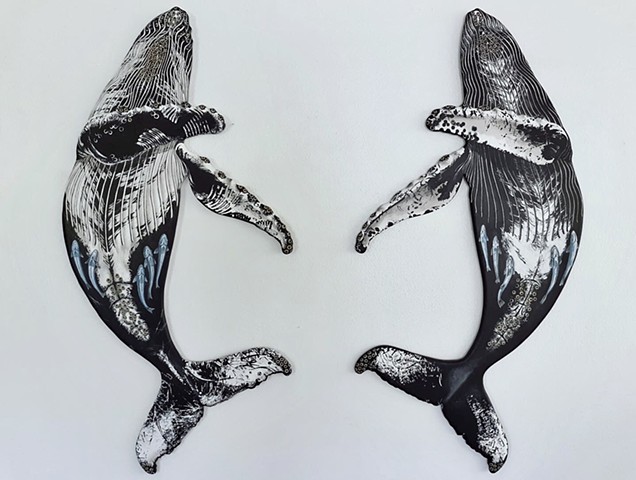 The sculptured flukes are accurately modeled after the pigment patterns of their live counterparts, while other features are emblematic of differing Humpback populations.

Orca scarring presents as rake marking on Humpback whales of both oceans, often sustained on flippers and flukes during calfhood or in defense of other progeny.

The barnacles are modeled after Coronula diadema, found exclusively on whales. The six-plated barnacles colonize the extremities of their cetacean hosts, drawing calcium carbonate from the ocean to solidify their immobile shells.

The barnacles cluster closely for hermaphroditic breeding, releasing larvae into the passing seas from atop their agreeable hosts. A single humpback whale can carry over 1,000lbs of these parasites at one time, and have been observed weaponizing the arthropods during contests between rival males.

Remoras are harmless hitchhikers that can adhere to humpback whales with modified disc atop their heads. They can also avoid being swept away by riding a slow-moving halo of water flowing around their swimming host, experiencing an 84% reduction in drag compared to open water at the same speed.

These 48” sculptures are made in anticipation of a second humpback breeding season on the ‘Au ‘au Channel of Maui. As an artist I wish to inspire creative minds to pursue scientific disciplines, thus expanding the dialog of ocean stewardship.